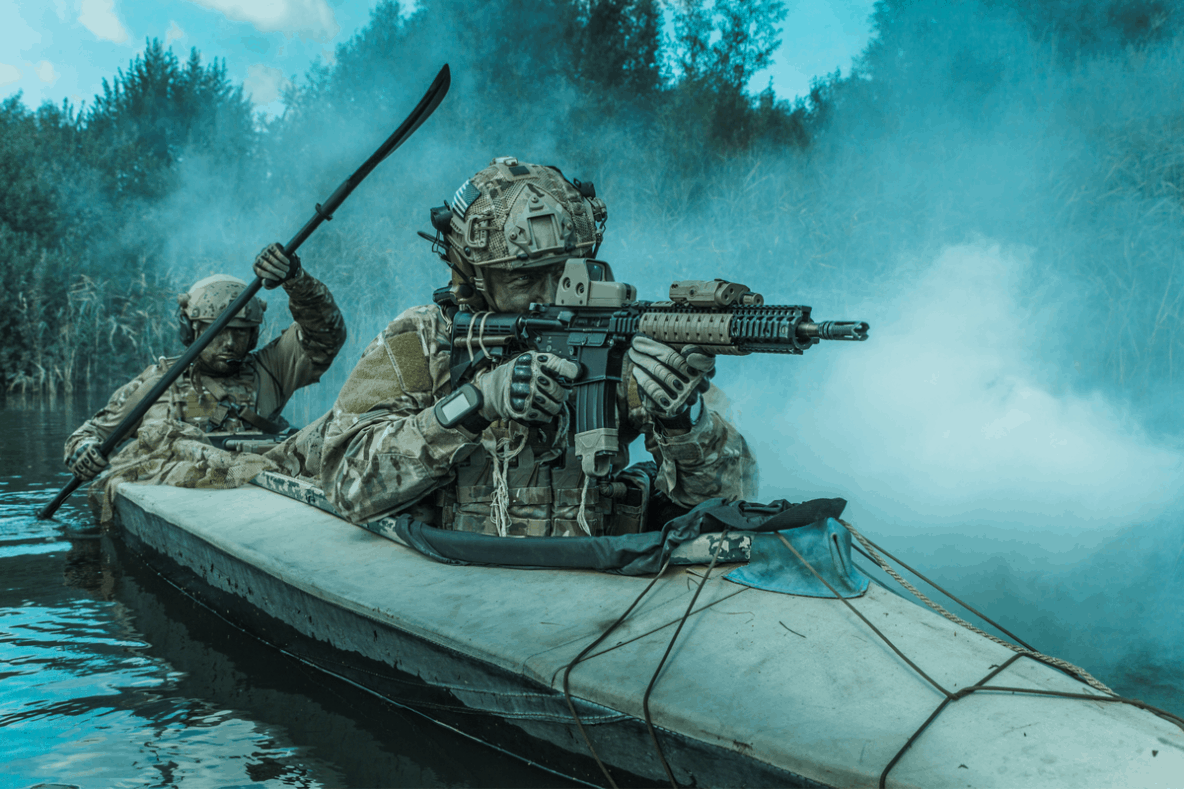 The rigors and demands of special forces training and missions are unlike any other athletic activity. On top of extreme physical demands, special forces operatives must deal with high levels of stress, a lack of sleep, fatigue, and extreme weather conditions.

Take, for example, Navy Seals. Success in this field and in combat situations requires all the strength and endurance one can summon from both a physical and mental perspective.

Special forces operatives (such as Marines, SAS, Navy Sales, and Rangers) are at the top of the athletic pyramid, and aside from their intense physical training, nutrition is one factor that contributes to mission success and long-term health.

As special forces soldiers are out in the field for weeks or months at a time, being in tip-top shape isn’t an option. What these soldiers must endure daily goes beyond the experience of many elite athletes.

Aside from this, meals on the field aren’t the best and aren’t the most nutritious. To fuel their bodies through grueling training or hard assignments, elite soldiers must take additional supplements to give their bodies extra fuel.

Here’s a rundown of the top 11 supplements used by the Special Forces and elite operatives:

Carbohydrates are the basis of energy and the body’s preferred fuel to support physical and mental activity. When undergoing extended periods of activity, fluid replacement beverages are essential.

In general, a combination of electrolytes (sodium and potassium) and glucose polymers (maltodextrin, or glucose and fructose) supply a rapid source of carbohydrate energy to soldiers out in the field.

For elite soldiers, who burn a lot more energy than the average individual, carbs are crucial. As a general rule, low glycemic carbs are best to consume to prevent drastic spikes in insulin and blood glucose levels. Foods like berries, sweet potatoes, squash, and beans are all great sources of low glycemic carbs.

For Special Forces, their work and physical activity aren’t like a typical workout; it’s often longer and more tiring. In such cases where there is an extended duration of activity with occasional bouts of high-intensity exercise, carbohydrates supply the vast majority of energy to the body.

For the most part, Navy Seals and Rangers consume a moderate amount of high glycemic carbs, such as potatoes and rice, or foods like maple syrup, honey, and pure maltodextrin, which are easily absorbed by the body.

Despite questions over their validity and effectiveness, multivitamins might be the only nutrients available to elite operatives during combat operations. Micronutrients are crucial to functions like energy production, blood cell formation, immune function, maintaining healthy muscles and joints, supplying oxygen to working muscles, and exercise recovery.

In the absence of food, multivitamins are often the only available nutrients for elite soldiers to maintain essential bodily functions during intense combat and endurance activity.

Amino acids are the building blocks for all proteins in the body. When food sources aren’t available, consuming adequate protein through a protein powder ensures the body stays in an anabolic state, and muscles aren’t broken down and used as energy.

A fast-digesting protein source is crucial when you’re out in the field. Whey protein has high bioavailability, meaning that a high percentage of whey enters systemic circulation, eliciting its intended effect within 60–90 minutes of consumption.

Another option is casein, a slow-digesting protein. Whey is a soluble protein that is digested almost straight away, while casein clots in the stomach, which results in a slow release of amino acids. This slow casein release is key to reducing muscle breakdown in the absence of food.

During prolonged or intense combat missions, creatine levels become depleted, which inhibits the body’s ability to perform and function under pressure. As a critical component of energy production, increasing phosphocreatine levels allows the muscles to produce more energy.

In addition to creatine’s physical benefits, which are supported by science and research, creatine provides mental benefits by improving memory and cognitive function.

Energy bars are a great alternative when food sources are low or unavailable (as in long combat operations). Most sports bars contain a good ratio of proteins, fats, and carbs, among other nutrients, to support energy production.

Sports bars make for a quick and easy snack when out in the field, hence their popularity with a lot of soldiers and elite fighting units.

Without a fresh supply of fruits and vegetables, elite soldiers often take vitamin C to keep their bodies healthy and functional. Vitamin C is crucial, and without vitamin C, serious side effects can occur.

In the old days, sailors used to develop scurvy due to a lack of vitamin C. This problem was solved when British naval ships started carrying limes onboard to supply sailors with vitamin C to prevent sunken eyes and teeth from falling out.

Much like energy bars, meal replacement drinks are often necessary for Navy Seals and Rangers when they don’t have access to food and need to keep their bodies fueled for action.

Meal replacement drinks are a quick and convenient way for elite soldiers to consume food when they are unable to cook and need to stay on the move during combat missions.

When the body gets pushed to its limit, it doesn’t take long for the body to break down; this is true in combat situations where extreme stress often accompanies mental and physical fatigue.

Antioxidants neutralize damaging compounds called free radicals that increase the risk of chronic diseases like cancer and heart disease. Some essential antioxidants include selenium, vitamin C, and beta carotene. These antioxidants are necessary for elite soldier’s to function in the most challenging environments.

L-Tyrosine can help fight off acute stress and cold stress, something that special forces operatives must deal with on a regular basis. “Cold stress” refers to physical stress caused by exposure to extreme cold rather than exercise.

One study by McGill University examined the effect of high doses of L-Tyrosine on experienced military personnel. The study found that high doses of L-tyrosine were able to mitigate many of the side effects associated with high-intensity acute stressors, such as cold exposure or heavy, intense training.

Note: Androstenedione is classified as an anabolic steroid and is considered a banned substance by the National Collegiate Athletic Association (NCAA). In fields where strength and extreme endurance are essential, the use of performance-enhancing drugs (like steroids or illegal substances) is common.

While performance-enhancing drugs (PEDs) are not legal or allowed, special forces operatives sometimes use these drugs to help them deal with extreme combat situations.

Although Navy Seals and Rangers are required to undergo regular drug tests, this isn’t possible when soldiers are away on combat missions. As security issues and hostilities often occur on a global scale, elite operatives often spend an increasing amount of time deployed far away from home under exceptional circumstances.

Former Rangers have mentioned that PEDs like Dexedrine, human growth hormone, and androgenic steroids are sometimes used to push the body beyond its limits (this is even more true in high-stress, combat situations).