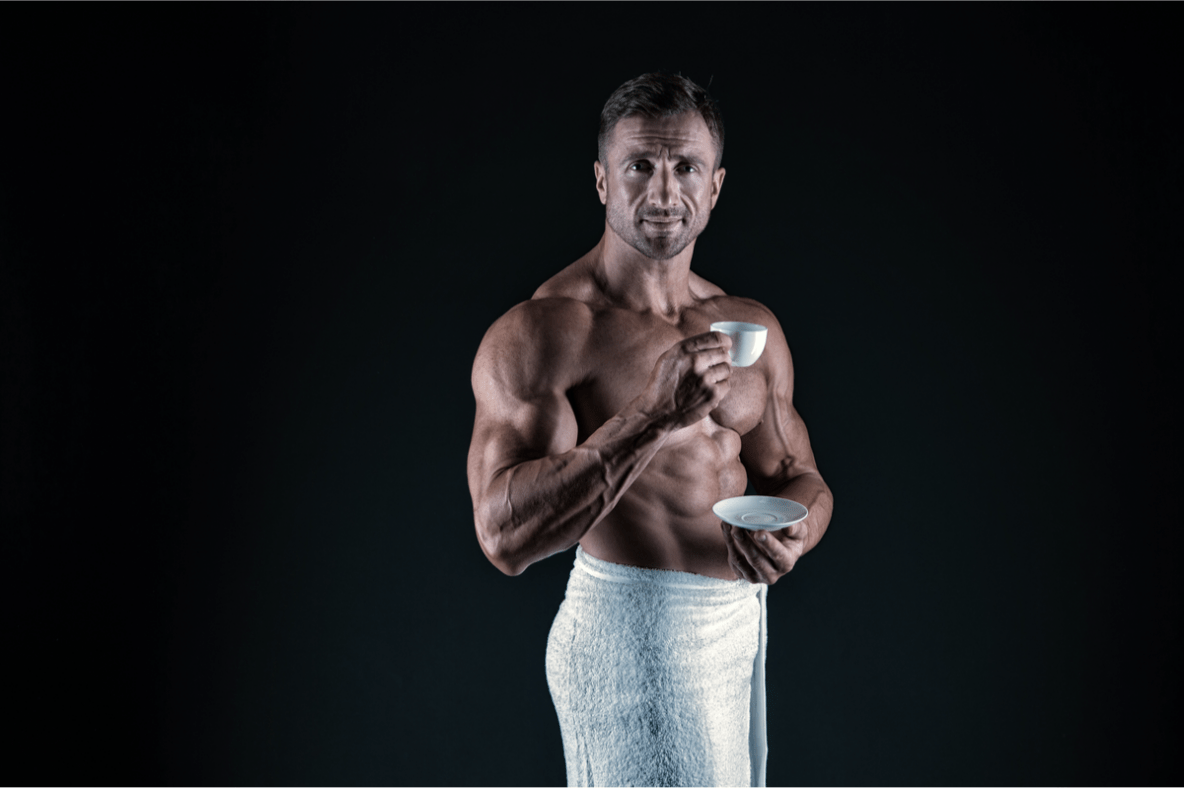 The International Coffee Organization claims that 1.6 billion cups of coffee are consumed every day globally, while the US Food and Drug Administration states that the average person consumes 300 mg of caffeine per day. With these figures in mind, it’s safe to say that coffee is the world’s most popular stimulant.

Caffeine, the main ingredient in coffee, is derived from over 60 plants such as tea leaves, coffee beans, and cacao seeds. Whether you’re an occasional coffee drinker or a full-time coffee addict, drinking coffee before a workout improves endurance, decreases pain, and helps the body burn more fat.

According to research, consuming caffeine before a workout helps athletes produce greater power and increase their training duration. Many professional athletes and fitness enthusiasts take caffeine as a performance-enhancer, or ergogenic aid, for a variety of physical activities.

While caffeine pills and pre-workouts are the most popular caffeine supplements amongst athletes and gym-goers, many studies show that coffee is just as effective at improving performance. Furthermore, research shows that energy drinks containing caffeine are also effective for improving mental focus, alertness, anaerobic performance, and endurance.

A meta-analysis of more than 300 studies showed that sports performance in athletes improved by 2–16% following caffeine intake. While a 16% improvement is unusual and more common in individuals with a strong response to caffeine, the average person will experience a 2-6% improvement in performance after caffeine consumption.

Concerning the difference between pure caffeine and drinking coffee, results show similar outcomes in performance. However, depending on the type of coffee you take, caffeine doses vary both in terms of content and quality.

Caffeine for Workouts and Exercise

A study published in the Journal of Applied Physiology found that cyclists who consumed caffeine were able to pedal faster and harder than cyclists who didn’t consume caffeine.

This additional power is possible because caffeine increases the muscles’ ability to burn fat and convert fat into energy for fuel. Research shows that taking caffeine before a workout also results in prolonged time to exhaustion.

The University of Guelph in Ontario conducted a study examining the effect of caffeine on exercise performance. The study found that taking caffeine before a workout decreased muscle glycogen stores by 55% during the first 15 minutes of exercise. This study indicates that a decrease in glycogen leads to muscles having more energy to burn over a longer period of time.

While this research is promising, most of these studies used caffeine in the form of pure tablets (taken with a glass of water). However, most people don’t invest in these supplements and lean on energy drinks and regular coffee to get their caffeine fix.

We must now ask the question: Will having your morning “cup of joe” provide you with the fuel you need for exercise? It turns out the answer depends on what type of coffee you drink, and your responsiveness to caffeine. Results vary from improvements of 16% for high caffeine responders to 2-6% for the average person.

Coffee, on its own, has several fat-burning properties. When consumed before exercise, caffeine can initiate lipolysis—the burning of fat instead of glycogen or glucose as a source of energy.

One of the main constituents of coffee is caffeine, a stimulant that acts in part to raise metabolic rates. The metabolic rate refers to the rate at which our body uses or burns energy.

A study published in PLoS one examined the effect of caffeine on exercise performance in competitive triathletes. The study found that the group of triathletes who consumed coffee before a workout showed a significant increase in metabolic rate functioning during activity and up to three hours after consumption.

The triathletes who consumed coffee also showed an increase in fat oxidation (fat burning) due to the rise in their metabolism. The findings of this study suggest that coffee is useful as a fat burner (both during a workout and after a workout).

Further research published in the American Journal of Physiology found that taking caffeine before a workout helps to increase fat loss. This fat loss occurs because caffeine increases the ability of mitochondria to oxidize fat during exercise.

We’ve all experienced that dip in energy when we think sleep is inevitable, our eyes struggle to stay open, and our body is overwhelmed by exhaustion. At times like this, a small molecule called adenosine binds to receptors in the brain that trigger a reaction, telling your body that you’re tired.

Coffee contains high levels of caffeine, and researchers at the University of Arkansas found that caffeine stimulates the central nervous system, helping the brain to stay active and focused.

Additional research suggests that caffeine stimulates the prefrontal lobe, activating those areas of the brain that control concentration and memory. However, this finding is inconsistent and varies from person to person.

The prefrontal lobe of the brain controls your attention span and your ability to organize and plan. Ultimately, drinking coffee can help athletes exercise for longer with higher levels of concentration.

If you tend to give up on your workouts when you feel sore or tired, caffeine can help you push harder and have a more comfortable workout. For people who incorporate strength training into their workouts, drinking caffeine can also increase the number of repetitions and sets during each training session.

Caffeine does this by preventing lactic acid from building up in the muscles. Lactic acid is what causes that achy, sore feeling during workouts. Of course, you still need to give your body plenty of rest after a workout to prevent further soreness and speed up muscle recovery.

Caffeine causes the neurons in the brain to fire with more frequency. As such, the pituitary gland senses an increase in activity and starts to panic, releasing the hormone adrenaline (epinephrine) from the adrenal glands. Adrenaline is the ‘fight or flight’ hormone that impacts the body in several distinct ways:

Researchers once believed that high doses of caffeine reduced caffeine’s effectiveness. But studies show that regardless of the amount of caffeine we take, caffeine still elicits a performance-enhancing effect.

Although caffeine’s health benefits have been well-documented thanks to multiple studies over the past few decades, caffeine’s side effects are more mysterious.

Most caffeine side effects come from taking too much caffeine. Studies suggest that caffeine’s real benefits come from drinking 2–4 cups of coffee a day. Although some people’s perception of a “cup of coffee” is often more like a jug of coffee.

Taking more than 500-600 mg of caffeine per day has been linked to heart problems and muscle tremors, while also increasing the risk of giving birth to underweight babies if taken during pregnancy. It’s important to understand that caffeine can also cause side effects, such as dizziness and the jitters.

A significant concern surrounding caffeine is its impact on hydration. Surprisingly, research has found that caffeine doesn’t have any effect on hydration levels over 24 hours.

However, the 1-2 hours after you consume caffeine is the time most people experience short-term dehydration. During this period, it’s important to ensure you stay hydrated and drink enough water. Otherwise, dehydration can erase caffeine’s benefits.

Caffeine causes a similar reaction in the body as any other drug. According to chronic studies on caffeine consumption, frequent large doses of caffeine appear to be counterproductive. This situation is a classic example of less is more if you’re looking to achieve the best results with caffeine.

To enjoy the health benefits of coffee, be sure to consume coffee in moderation. High levels of caffeine consumption can raise your heartbeat to unhealthy levels.

If you already have a cardiovascular condition, it’s essential to check with your doctor first before drinking coffee. As a final caution, caffeine’s impact on sleep can be detrimental, and the importance of sleep on the human body should never be underestimated or ignored.

It’s important to understand that there’s a difference between consuming a measured dose of caffeine and drinking a regular cup of coffee. There are many different types of coffee and many different ways to brew coffee. So how much caffeine ends up in your cup and how much stimulation you get depends on the brewing method and the blend used.

Research in the Journal of the International Society of Sports Nutrition notes that consuming 3-6 milligrams of caffeinated coffee for every kilogram of bodyweight leads to improved performance.

You should be aware, however, that, on average, a single cup of coffee contains about 95–165 mg of caffeine. Therefore, if you weigh 150 pounds (or 70 kilograms), you should consume approximately 210–420 mg of caffeine, which you can get from two cups (not mugs) of coffee.

If you don’t consume coffee regularly, you should begin by taking a small amount of caffeine first to avoid any jittery side effects. The optimal dose of caffeine varies from person to person, so take your time to figure out what works best for you.

Not everyone will react to caffeine the same way. Three milligrams of caffeine in a cup of coffee may boost one person’s performance at the gym but have no effect on someone else.

Studies show that supplementing your coffee with amino acids like L-Theanine can further enhance the benefits of coffee. Also, replacing milk and sugar with MCT oil or coconut oil is a great way to make a healthier cup of coffee.

The healthy fats found in MCT and coconut oil digest at a slower rate, and release their energy-boosting benefits over time, so you don’t get an enormous rush of caffeine all at once.

The Effectiveness of Caffeine

There is sufficient evidence to suggest that consuming coffee or pure caffeine before training increases exercise performance. If you want to increase your running distance or have more energy at the gym, caffeine can boost your physical performance when taken at the correct time.