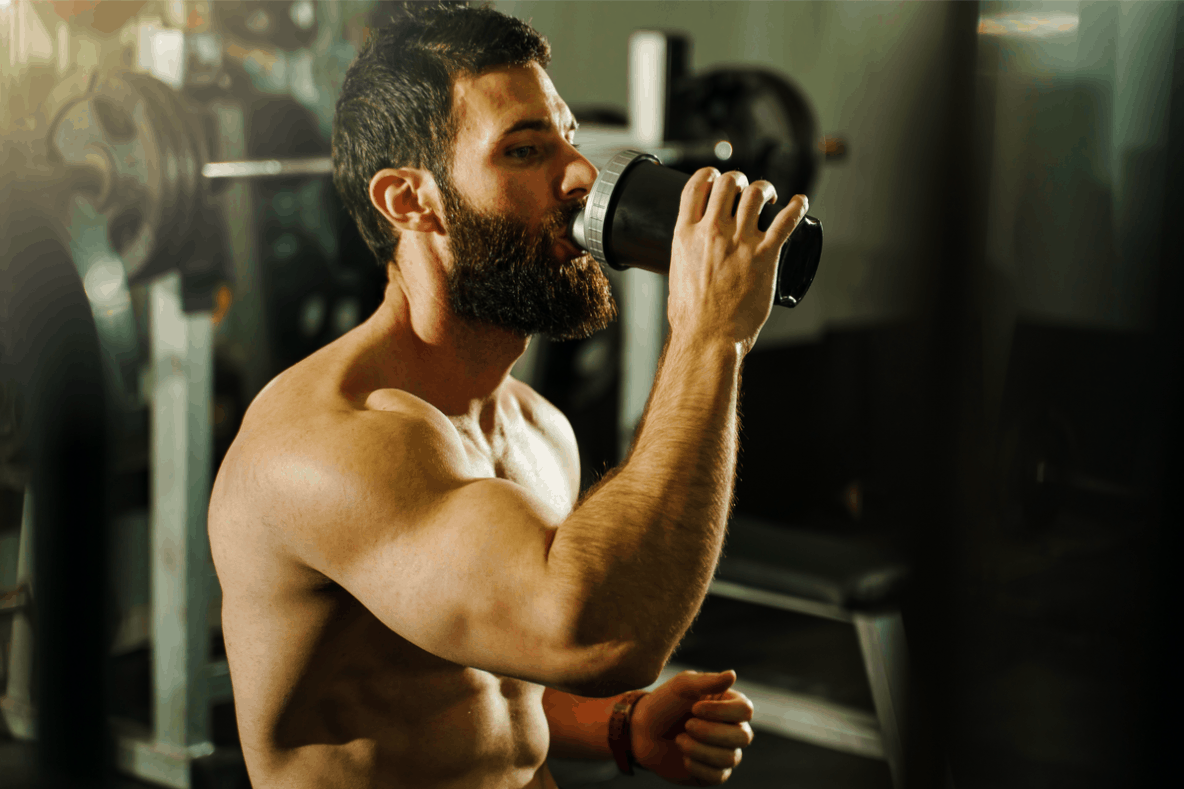 BCAAs are incredibly popular in the fitness world. Whether you take BCAAs before, after, or during a workout, BCAAs are said to prevent muscle breakdown and aid muscle growth.

However, some people argue that taking BCAAs is redundant because every time we consume protein, we also consume essential amino acids. For example, whey protein powder, on average, contains up to 11 grams of leucine, 6 grams of isoleucine, and 6 grams of valine.

BCAAs represent around 40% of all vital amino acids in the body, with the muscles containing approximately 18% of all BCAAs. However, contrary to other amino acids, BCAAs are broken down in the muscles instead of the liver; this is why many people believe that BCAAs play an essential role in energy production during exercise.

Besides stimulating muscle protein synthesis, BCAAs also decrease cognitive fatigue during extended periods of activity. The potential to reduce mental fatigue may prove beneficial for increasing physical endurance in athletes. However, one of the main concerns surrounding BCAA supplements is BCAAs bioavailability once it enters the body.

As BCAAs have poor hydrophilic performance, meaning BCAAs are not soluble in water, they struggle to dissolve in the digestive tract. This insolubility means that despite taking high concentrations of BCAAs, your body is unable to absorb 100% of the BCAAs you consume.

If you wish to add more BCAAs to your diet, the following foods contain high amounts of Branched-Chain Amino Acids:

BCAAs contain three essential amino acids: isoleucine, leucine, and valine. In most cases, BCAA supplements include twice the amount of leucine than valine or isoleucine, and this is known as a 2:1:1 ratio.

BCAA supplements offer this ratio because leucine is, according to research published in the Journal of Nutrition, effective at stimulating muscle protein synthesis and suppressing the breakdown of protein in muscles.

Histidine: is the base of histamine, the neurotransmitter involved in immune reactions, digestion, sexual function, and the circadian rhythm/sleep-wake cycle. Histidine is also crucial for maintaining the protective barrier surrounding nerve cells.

Isoleucine: is a branched-chain amino acid that plays a vital role in muscle metabolism, immune system support, the production of hemoglobin, and energy production and regulation.

Leucine: is one of the most important BCAAs. Leucine is needed for muscle protein synthesis and repair. Aside from this, leucine plays a role in blood glucose regulation, wound healing, and growth hormone production.

Lysine: is an amino acid that plays a role in muscle protein synthesis, hormone production, as well as the absorption of calcium.

Lysine also serves an important function in energy production, immune support, and the production of structural proteins like collagen and elastin.

Methionine: is an amino acid that’s important for metabolic functioning and the detoxification process.

Phenylalanine: is the precursor amino acid for several important neurotransmitters, including tyrosine, dopamine, epinephrine, and norepinephrine.

Phenylalanine plays an essential role in the structure and function of proteins and enzymes, contributing to the formation of other amino acids.

Threonine: is an important component of structural proteins like collagen and elastin, both of which are crucial for healthy skin and connective tissue. Threonine also contributes to fat metabolism and optimal immune functioning.

Tryptophan: often thought to be the cause of drowsiness after eating turkey, is crucial for maintaining the correct balance of nitrogen in the body.

Valine: as a constituent of BCAAs, helps to stimulate muscle protein synthesis and enhance energy production.

As you can see from this list, these nine essential amino acids play a vital role in maintaining and supporting the body.

A study published in the European Journal of Clinical Nutrition examined a group of healthy women who took part in regular resistance exercise. The women took 2 grams of leucine and 5 grams of BCAAs before and after each training session and on rest days as well. The results of the study found that BCAA supplements did not have an impact on the women’s body composition or muscle mass.

In the study, the men took BCAA supplements that provided 2.25 grams of leucine and 4.5 grams of BCAAs before and after each training session (with four sessions each week).

Again, the researchers found no impact on body composition, either positive or negative, when supplementing with BCAAs. Further research by McMaster University examined resistance-trained men who consumed a diet high in protein.

In the study, the men took 3.5 grams of leucine and 7 grams of BCAAs before and after each training session. At the end of the study, the researchers found that BCAA supplements preserved muscle mass and had a positive effect on muscle protein synthesis. Unfortunately, other researchers have criticized this study for dubious data reporting, which may have led to flawed conclusions at the end of the study.

An article published in the International Journal of Sports Medicine examined the effect of BCAAs on elite wrestlers who had a lean body fat percentage of 6–8 percent.

The study found that BCAAs didn’t preserve muscle mass, but did provide a boost to fat loss during a hypo-caloric diet that was quite aggressive and took place over 19-days.

However, it’s important to note that the wrestlers’ protein intake was low (about 1 gram for every 2.2 pounds of bodyweight), and the BCAA dose (67 grams of BCAAs per day, which included 50 grams of leucine) was too high for regular consumption.

A study published in Sports Medicine looked at the quantity of BCAAs and the impact of BCAA ingredients on muscle mass. The study found that BCAA supplements that have more leucine are more effective when it comes to increasing muscle mass; this is likely due to leucine’s anabolic effect on protein metabolism.

As leucine increases muscle protein synthesis rates, BCAAs with a high leucine ratio are in a better position to protect and support muscles. The omission of leucine has been shown to inactivate mTOR signaling, which results in the breakdown of muscle proteins.

Remember, all forms of intense physical activity send direct stress to the muscles. During exercise, muscles break down through a process known as catabolism, which involves the separation of muscle fibers.

The subsequent repair of muscles is known as anabolism—the process where muscle protein synthesis occurs, leading to muscle growth and development.

BCAAs are said to promote cell signaling and protein synthesis through the activation of the mTOR pathway; mTOR is the central regulator of several processes in the body that contribute to cell growth, cell proliferation, cell migration, and muscle growth.

With BCAA supplements, you increase the amount of available leucine, isoleucine, and valine, but the availability of other essential amino acids is limited.

A study reported in Frontiers in Physiology found that BCAAs do not build muscle. In the study, 25 grams of whey protein, which contained 3 grams of leucine and 6.25 grams of protein, were mixed with essential amino acids.

This study suggests that leucine stimulates more muscle growth when consumed on its own without the presence of isoleucine and valine. The reason this occurs is likely due to isoleucine and valine competing with leucine for absorption in the gut and entry into muscle tissues.

Another study published in the Journal of the International Society of Sports Nutrition found that people who took BCAAs performed 20% better on strength training tests. In the study, when the participants repeated the same strength-training tests after 24 to 48 hours, it was found that there was a “possibility” that BCAAs also improved their recovery time.

St. Mary’s University school of health and Applied Science performed a study on 16 resistance-trained athletes and found that branched-chain amino acids improved muscle recovery and performance and also led to a decrease in muscle soreness.

Another research study by the Department of Community Nutrition at Tehran University showed that if you supplement with BCAAs, you will receive more muscle recovery benefits and reduce muscle soreness compared to supplementing with other products.

Researchers discovered that taking 4 grams of leucine per day increases the strength performance of non-athletic people. These studies indicate that BCAAs are beneficial for both trained and untrained individuals.

It seems that BCAAs have the potential to slow down muscle loss, but cannot stop or prevent muscle loss altogether. The Department of Rehabilitation in Midorigaoka Hospital in Japan carried out a 10-day study on 22 older adults committed to a hospital bed.

BCAAs can also decrease the extent of Delayed Onset Muscle Soreness after a hard training session. The leading theory behind this is that BCAAs help to reduce serum levels of intramuscular enzymes associated with muscle damage and high creatine kinase levels.

A study of 16 male athletes who participated in 120 minutes of cycling at 70% of their VO₂ max found that athletes who supplemented with BCAAs over 14-days experienced a significant decrease in creatine kinase levels compared to athletes who took no BCAAs.

Another study published in the Journal of the International Society of Sports Nutrition examined 12 male athletes who performed damaging muscle exercises.

Furthermore, a study by Nagoya University found that Delayed Onset Muscle Soreness peaked 2–3 days after exercise; however, muscle soreness was significantly lower in people who supplemented with BCAAs.

According to the Gillings School of public health, people who consumed approximately 15 grams of BCAAs every day lowered their chance of being overweight or obese by a significant amount.

According to central fatigue theory, excess serotonin crosses the blood-brain barrier during physical activity, which contributes to feelings of fatigue.

Altering serotonin activity curbs various psychological responses like lethargy, sleepiness, and mood changes, which makes us feel more awake. When we alter the ratio of tryptophan to BCAAs by increasing the amount of BCAAs in our diet, we limit the amount of serotonin that the brain receives, decreasing feelings of tiredness.

A Swedish study of male endurance cyclists examined the effects of branched-chain amino acids on perceived exertion after 80 minutes of exercise. In the study, after consuming BCAAs, cyclists’ perceived ratings of exertion were 7% lower, and evaluations of mental fatigue were 15% lower than cyclists who took a placebo.

Another study conducted by the Université d’Orléans examined a group of sailors in a 32 hour offshore sailing race. After the race finished, the researchers found that the detrimental effects of fatigue were significantly lower in the sailing group that consumed a high protein diet rich in BCAAs.

Furthermore, researchers at Rutgers University examined the effects of BCAA supplementation on cycling performance. In the study, cyclists who consumed BCAAs cycled for 12% longer than cyclists who took a placebo supplement.

While these studies show promise, other studies report no association between BCAA supplements and decreased fatigue.

Still, the fact remains that BCAA supplements are a multi-million dollar industry based around the belief that taking BCAAs keeps the body in an anabolic state and stimulates muscle protein synthesis. While there is some truth to these claims, it seems that BCAAs are only useful in the absence of sufficient protein in a person’s diet.

There is no need to take a BCAA supplement if you already have enough protein in your diet. Eating a protein-rich diet will cover all your BCAA needs without the need to supplement with additional BCAA products.

If you want to supplement with BCAAs, you’re better off taking whey protein or egg protein, as these supplements provide you with all the essential amino acids your body needs.