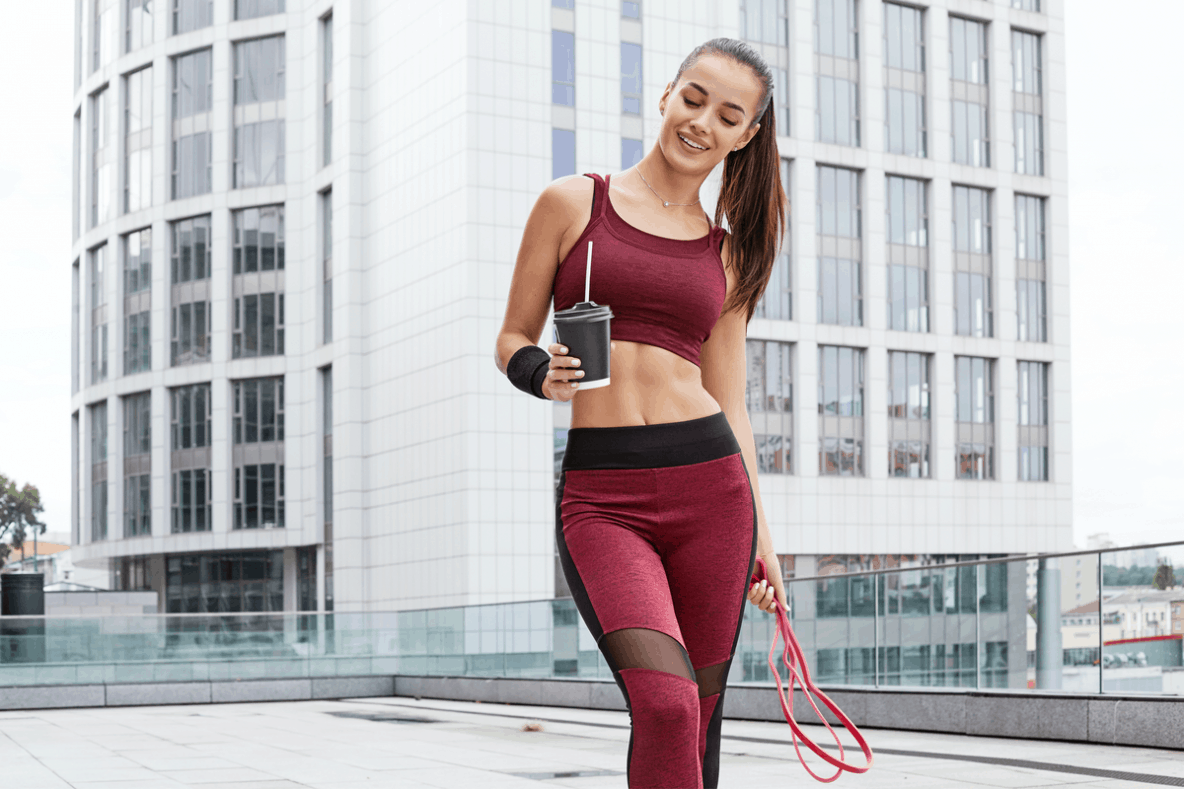 Studies have shown that caffeine can greatly improve our workouts. It helps us lift heavier weights, run for longer periods of time, and achieve greater aerobic performance. As a matter of fact, a study published in the Journal of Applied Physiology found that cyclists who had consumed caffeine were able to pedal faster and harder than cyclists who hadn’t.

This is possible because caffeine boosts the ability of our muscles to burn fat and convert it into energy. As we exercise, we get increased energy and endurance, which in turn lends itself to increased alertness and a more enjoyable experience.

More specifically, research shows that taking caffeine before working out results in “prolonged time to exhaustion.”

The University of Guelph in Ontario conducted a study which found that ingesting caffeine before a workout decreases muscle glycogen by approximately 55% over the first 15 minutes of exercise, which means that taking caffeine leads to your muscles having more energy for a more sustained period of time.

While this research is promising, most of it has studied the effects of caffeine in the form of pure tablets. These tablets are typically consumed as supplements with a glass of water.

However, most people don’t invest in these supplements and rely on energy drinks and coffee in order to get their caffeine fix. So, will having your morning cup of joe provide you with the fuel you need for exercise?

Can taking caffeine before a workout make any difference? It turns out the answer depends both on exactly what type of coffee you drink, and your genes.

It’s important to understand that there’s a difference between consuming a dose of caffeine that has been specifically measured out, and drinking your regular cup of coffee. There are many different types of coffee and many different ways to brew it, so how much caffeine ends up in your cup and how much stimulation you get depends on the brewing method and specific blend used.

Research has shown that consuming 3-6 milligrams of caffeinated coffee for every kilogram of body weight leads to improved performance. So, if you’d like to see a difference, ensuring that you are getting this much caffeine from your brew is ideal.

You should be aware that on average, a single cup of coffee contains about 95-165 mg of caffeine. If you weigh 150 pounds (or 70 kilograms), you should consume 210-420 mg of caffeine, which you’ll get in roughly two cups (not mugs) of coffee.

If you don’t normally consume coffee, you should begin with a small amount, no matter how much you weigh; caffeine is known to cause jittery side effects. The optimal dose of caffeine will vary from person to person, so you should take your time to figure out what the best dosage is for you.

On top of this, it’s important to keep in mind that research studies often observe the effects of caffeine on a group of people, and how it improves their athletic performance as a whole.

However, our individual responses to caffeine and how it impacts us is heavily influenced by certain genetic factors. Not everyone will react to a dose of caffeine in the same way. Three milligrams of caffeine in a morning cup of coffee may boost your friend’s experience at the gym, and not yours

If you’re wondering when to take caffeine to boost your workouts, it turns out that it’s ideal to consume coffee about an hour before working out. Experts have recommended that people should ingest caffeine about 45-90 minutes before they perform exercise.

While energy drinks and coffee are popular ways to get caffeine, there are other forms, such as caffeine gum, capsules, and other caffeine options that are currently being explored, including mouth rinses and energy bars.

Currently, this experimentation is still new and the effect of caffeine on exercise performance is still under investigation. Some forms of caffeine, such as gum, are absorbed much faster, which means you’ll get an enhancing effect sooner. Certain forms of caffeine may provide a boost as soon as ten minutes before you begin working out.

Safety and Side Effects of Coffee

So, should you load up on caffeine? Maybe not quite yet. It’s important to understand that caffeine can cause side effects, such as dizziness and the jitters, and just like any other supplement, some people may not see an improvement in their exercise performance.

A large concern surrounding caffeine is its impact on hydration. Research has shown that caffeine doesn’t have an impact on levels of hydration over 24 hours. However, the 1-2 hours directly after you’ve consumed caffeine (which will likely fall within your session at the gym or athletic event) is the most likely time that you’ll experience short-term dehydration.

During this period of time, it’s important to ensure you’re hydrated and drinking enough water—otherwise, the benefits you receive from drinking coffee will be lost due to the negative influence of dehydration.

Consuming just the right amount of caffeine in your coffee and taking it about an hour before your workout can lead to increased endurance and better overall performance.

Studies have shown that supplementing your coffee with amino acids like L-Theanine can even further enhance these effects. In addition, cutting out the milk and sugar that you normally add to your coffee and replacing this with healthy fats can also provide a boost and lead to an overall more healthy choice.

The best option is to add MCT oil or coconut oil to your coffee instead. These healthy fats have been shown to digest slowly, releasing energy-boosting benefits over time so you don’t get a large rush but instead can sustain the benefits you get from your caffeine over a longer period.

Pay attention to how your coffee is brewed and what type of coffee you consume. Aim to get 3-6 mg of caffeine per kilogram of body weight, and take it no longer than 90 minutes before you exercise.

Lastly, an important thing to keep in mind is that caffeine can cause jittery side effects, and everyone responds differently. Take the time to experiment with caffeine in order to find exactly what works for you.